Syrian star Omar Al-Soma is on the verge of leaving Al-Ahly Jeddah at the end of the Saudi League, after the team was relegated to the Saudi First Division for the first time in its history. Saudi press reports revealed that the Egyptian teams Al-Ahly and Zamalek want to include the player.

According to the Saudi newspaper, Al-Muwatin, the Saudi Al-Ahly administration is seeking to get rid of Al-Soma during the current summer transfers due to his large salary, in light of the financial crisis the club is going through, which opens the door to Al-Ahly and Zamalek clubs, who are fighting to include the player with full force, along with the Kuwaiti Al-Qadisiyah club. , and Rayan Qatar.


She added that Omar Al-Soma is studying many options, including staying with Al-Ahly and helping the team return to the Saudi League again in the summer of 2023..

She noted that there Many clubs to take advantage of Al-Ahly Jeddah’s relegation to the first division for the first time in its history, after occupying the fifteenth place with 32 points, and kidnapping the club’s most prominent star..

Omar Al-Soma is considered one of the best players in the history of the Saudi Professional League, and he is the historical scorer of the tournament throughout the ages, and his team, Al-Ahly Jeddah, has his name in letters of gold, after the shock of his team’s relegation to the Second Division.

Omar Al-Soma joined Al-Ahly of Saudi Arabia in 2014 from Al-Qadisiyah in Kuwait, and his star has not extinguished since his first appearance with the team at the Radioactive Jewel Stadium, where he scored his first hat-trick, then his goals with the emperor continued until he became the club’s historical scorer and the top scorer in the Saudi League for 3 consecutive seasons.

Omar Al-Soma in the balance of numbers


The most prominent figures of Omar Al-Soma, the historical scorer for Al-Ahly Jeddah and the Saudi League, are as follows:

He became the club’s all-time top scorer and top scorer in the Saudi League.

He is the fastest scorer in the world after scoring 50 goals in 45 matches.

He scored 22 goals as the top scorer in the Saudi League in the 2014 season.

In total, this season he played 26 matches, scored 11 goals and made 4 more goals.

Throughout his career, he participated in 239 matches, during which he scored 192 goals and assisted 30.

Its market value is 3.5 million euros. 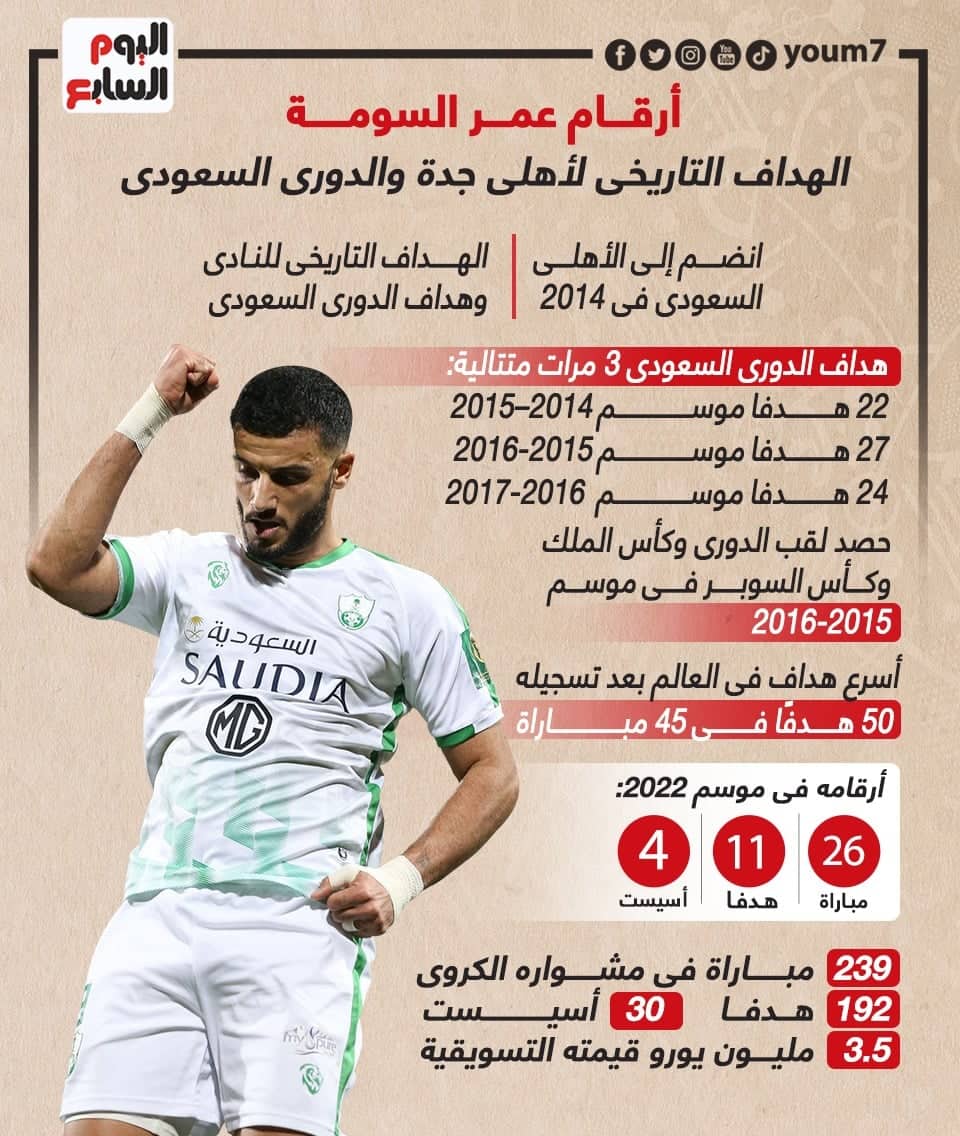