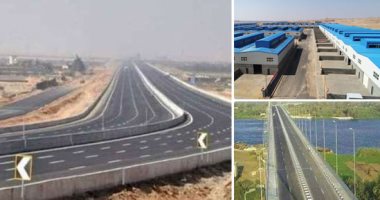 Transport projects are one of the most important goals of national projects, represented in the national road network, and emphasizing that the development of roads should be a decent life initiative, an introduction to developing the transport system, in more than 4600 villages and their dependencies.

A report by the Ministry of Planning and Economic Development clarified the role of the “Decent Life” initiative in improving the quality of transport services in the Egyptian countryside, where 9,000 km of internal and main roads are being paved, and 634 car and pedestrian bridges are established and developed, in addition to the development of 116 railway stations, to serve the people of 1477 villages within the first phase of the initiative, with a population of more than 17 million citizens, and during the fiscal year 21/2022 (only) more than 5.4 billion pounds were spent to implement transport sector projects within the “Dignified Life” initiative.