Today, Monday, English press reports revealed the future of Egyptian star Mohamed Salah with his Liverpool team, regarding whether or not the pharaoh will continue at Anfield in the coming seasons.

Mohamed Salah is linked to a contract with Liverpool that ends in June 2023, and the two parties have not yet reached an agreement on the renewal, but reports have emerged revealing the Reds’ plan to sell Mohamed Salah for 60 million pounds this summer, for fear of his free departure next summer.

And the British newspaper, Mirror, said today, as for the situation of Mohamed Salah, the most likely thing at the moment is that Mohamed Salah will leave Liverpool in a free transfer deal at the end of next season, not this season. . 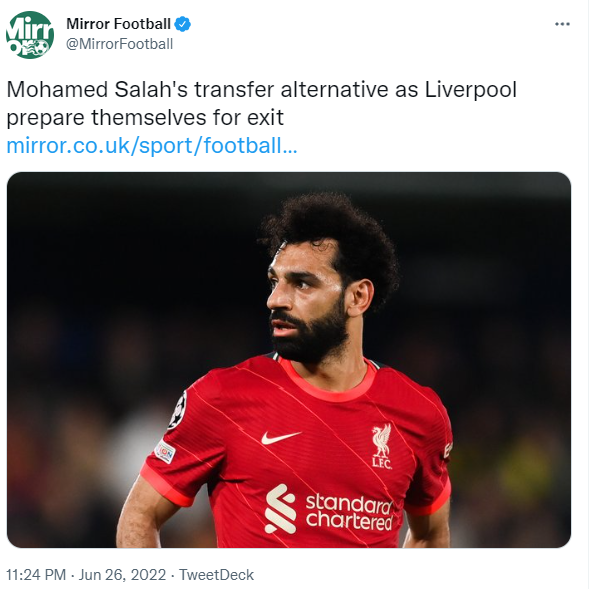 English press reports have revealed that Liverpool is considering allowing Egyptian star Mohamed Salah to leave the team during the current summer transfer market, if an offer of 60 million pounds arrives.

According to the newspaper “Sun”, Liverpool will allow the departure of Egyptian star Mohamed Salah this summer, if an offer of 60 million pounds arrives, after the departure of Senegalese star Sadio Mane towards Bayern Munich.

The newspaper added that the Reds administration fears the departure of its Egyptian star for free next summer, in light of the failure to reach a final agreement with him to sign a new contract.

And the newspaper pointed out that Liverpool does not want to implement the financial demands of the Egyptian star, Mohamed Salah, for fear of destroying the players’ salary structure, in light of the player’s desire to obtain an amount of 400,000 pounds per week.