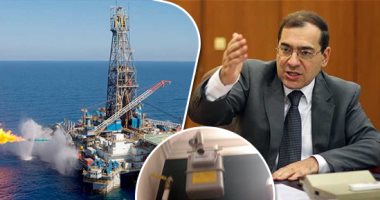 Over the past eight years, the oil and gas sector has made 401 new petroleum discoveries (281 crude oil, 120 gas) in the western and eastern deserts, the Mediterranean, the Sinai, the delta and the Gulf of Suez. Naturally, as the rate of production from petroleum wealth witnessed a steady increase, and while

1- The total production of petroleum wealth during the past eight years amounted to about 597 million tons, including 245 million tons of crude oil and condensates, about 342 million tons of natural gas, and 10 million tons of butane, other than that produced by refineries and joint stock companies.

2- Egypt’s production of natural gas has risen to unprecedented rates, as it rose to its highest levels as one of the fruits of the petroleum sector’s plans to expedite the development of the discovered fields and put them on production, which contributed to gradually increasing production.

3- As production rates of natural gas reached about 6.8 billion cubic feet per day during the current year.

4- Self-sufficiency in the locally produced natural gas was achieved by the end of September 2018, thanks to the increase in local production of gas as a result of the completion of the development and laying down of new phases of many gas field development projects, the most important of which are four major fields in the Mediterranean on the production map, which led to the cessation of importing Liquefied natural gas, thus rationalizing the use of foreign exchange directed to import, and reducing the import bill, which constitutes a burden on the state’s general budget.

5- After achieving self-sufficiency in September 2018 and resuming exports, Egypt turned from the largest importer of liquefied gas between the years 2015-2017, to export, and then its success in supporting its position as a major player in the gas sector, as it occupied the second place in North Africa and the Middle East in the production of Natural gas, and the 14th globally in natural gas production in 2020, after it was ranked 18th in the world in 2015.

6- Achieving the highest production rate of petroleum wealth in the history of Egypt in August 2019, reaching about 1.9 million barrels equivalent per day of crude oil, gas and condensates.